END_OF_DOCUMENT_TOKEN_TO_BE_REPLACED

The Secret of Fatima Revealed

What is the Secret of Fatima?

The Secret of Fatima is a prophetic vision of future world events delivered with a peace plan from Heaven, to 3 young shepherd children in Fatima, Portugal 1917.  The Children of Fatima together witnessed a series of apparitions of the Virgin Mary from May 13th 1917 to October 13th 1917.

It was during the third apparition of the Virgin Mary on July 13th 1917 that she bestowed the Fatima Prophesy to them, in trust, as a Secret.  The Secret of Fatima was to be revealed at a later time deemed appropriate by ‘Heaven’.

The Fatima prophecy was revealed to the world in 3 distinct parts.

The delayed public revelation of the Third Secret of Fatima has caused controversy for the Church, division between devotees, and accusations of a Vatican conspiracy to hide the true meaning and Message of Fatima.

The First Secret of Fatima

After a 25 year silence, the First Secret of Fatima was revealed to the Bishop of Leiria in a memoire, written by Lucia Dos Santos, the oldest of the Seers.

The Bishop of Leiria had requested a detailed account of the short life of the youngest of the Children of Fatima, Lucia’s cousin Jacinta Marto, for the third edition of a published book, titled ‘Jacinta’, in 1941.

Lucia interpreted an internal compulsion as Heaven’s sign that the time was right for her to reveal the first part of the Secret of Fatima.

“This request penetrated to the depths of my soul like a ray of light, giving me to know that the time has come to reveal the first two part of the secret”.  Sr. Lucia (original translation)

The First and Second parts of the Secret of Fatima were publicly revealed as separate chapters in the book ‘Jacinta’, published in1942.

The Original Text of the First Secret of Fatima

Translation of the Original Text:

… What is the secret? It seems to me that I can reveal it, since I already have permission from Heaven to do so.

Well, the secret is made up of three distinct parts, two of which I am now going to reveal.

The first part is the vision of hell.

Our Lady showed us a great sea of fire which seemed to be under the earth. Plunged in this fire were demons and souls in human form, like transparent burning embers, all blackened or burnished bronze, floating about in the conflagration, now raised into the air by the flames that issued from within themselves together with great clouds of smoke, now falling back on every side like sparks in a huge fire, without weight or equilibrium, and amid shrieks and groans of pain and despair, which horrified us and made us tremble with fear. The demons could be distinguished by their terrifying and repulsive likeness to frightful and unknown animals, all black and transparent. This vision lasted but an instant. How can we ever be grateful enough to our kind heavenly Mother, who had already prepared us by promising, in the first Apparition, to take us to heaven. Otherwise, I think we would have died of fear and terror.

“You have seen hell where the souls of poor sinners go. To save them, God wishes to establish in the world devotion to my Immaculate Heart. If what I say to you is done, many souls will be saved and there will be peace.

Continue reading to reveal the Second Secret of Fatima.

Comment on the 13th Day depiction of the Vision of Hell. 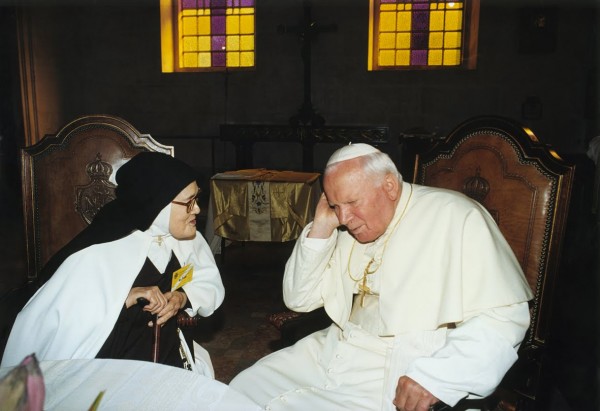 the place to find easy-to-understand answers to all your questions about Fatima.

Fatima is a town in Portugal located 142 km north of Lisbon. It is one of the most important Catholic shrines dedicated to the Virgin Mary in the world, and has been officially recognized by the Roman Catholic Church as a site of apparition, miracle and healing. The Fatima Sanctuary welcomes millions of pilgrims and tourists every year.

The Apparitions of Fatima

Fatima‘s fame is due to the Apparitions of the Virgin Mary who appeared to three shepherd children; Lucia dos Santos and her two younger cousins, Francisco and Jacinta Marto, on the 13th day of each month between May and October of 1917.

The Miracle of Fatima

The apparition of October 13th was accompanied by a promised miracle, the ‘Miracle of the Sun’, which was reportedly witnessed by over 70,000 people. Thousands of testimonies corroborate the incident, including scientific reports and photographs of the day. The event was reported in media around the world.

During the Apparitions of Fatima, the Children were given a message for the world. Shown to them as Secrets to be later publicly revealed, the message was a series of predictions and prophesies of personal and catastrophic world events, delivered with a directive plan for peace.

The Message of Fatima is very relevant for today, as the new Pope Francis devotes the World to Fatima on Sunday October 13th 2013, the 97th Anniversary of the Miracle. Previous Popes have recognized the importance of the Fatima message and sought to satisfy the plan for peace. Will this attempt to fulfill the Prophecy?

Fatima is shrouded by controversy, both inside and outside the Church. Devotees vie for authority by exposing supposed lies and corruption within the Church, and alternative communities give other meanings to Fatima from mass hysteria to UFO invasions.

What is the truth? Investigate more of the facts to make up your own mind.